This last month we have been working on a social media frenzy! This means setting them up to actually look nice! I've also spent some time trying to get the word out about our game, but definitely have more work to do here!

We have taken a step back from development to plan and think about some of our ideas and trying to flesh things out more.

For example: should train tracks be allowed to cross over each other? Do we let the trains stop for each other, or do we do a collision system where you can allow tracks to cross but it will risk trains colliding, unless you do it properly and build a bridge.
How should the actual bridge laying mechanics work? How do we automatically handle them raising over obstacles (other tracks) vs just going from the start point to the end point.

Another example: the research and development system. We want to do this but how should it be implemented? A standard tech tree we don't want as this doesn't allow for randomisation of the tech tree. When such fixed tree is in place you "game" the system by cherry picking the best route and never explore other ways. We want something you might see in Stellaris where its more card based. We also don't want all technology to be all benefits. we want trade offs and risks. Does researching 10% faster trains incur a 10% maintenance hike? Does cost cutting incur some percent chance of disaster?
Let us know if you have any ideas of what things should be in the research/tech system - either positive or negative traits.

We've been polishing the prototype, ironing out bugs particularly multiplayer bugs. Some sounds have gone into the game to add atmosphere, we have been limited here as Godot is still buggy with all audio dying after a few minutes. But, I realised this is important to be working in the prototype so I went in and fixed the bug in the Godot engine and have submitted it as pull request.

The art department has a nice new background for the menu: 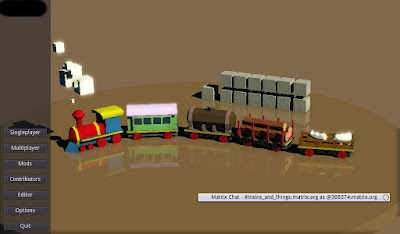 This is still a work in progress, but it is definitely better then what we used to have!


As have been a few bugs hitting us later in the game which has caused us to add support for saving and loading of games earlier than anticipated. This will now save us having to play a whole game through to try to get to a point where we can replicate an issue and so fix it. This will save an immense amount of time when debugging mid to late game problems.
Here is a video of me loading a game:

In future, save game support also could provides an avenue for us to be able to possibly add support for players to be able to join your game mid way through a multiplayer game!


I have also been working on some new selection effects. Previously I have just been scaling the model up as a temporary solution, but decided it shouldn't be that hard to do.... right? In fact it has been quite easy but has required some C++ which was a bit frustrating to begin with. 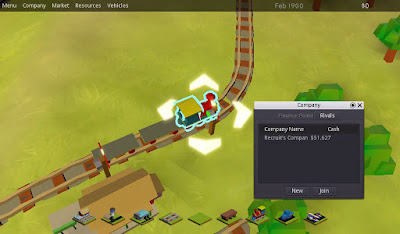 
Finally, as a result of our social media push, we got our first listing on a gaming news site: https://www.gamingonlinux.com/articles/trains-things-a-multiplayer-focused-economic-strategy-game-built-on-linux.10019
Yay! A thank you to gaming on linux.

Expect things to be a bit quite in the next few months as I am going back to College for my last semester, so the first months back I hit the study hard!

That's all for this month!